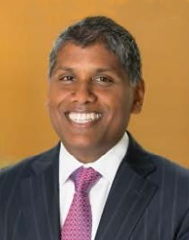 Dr. Mohan Suntha is the President and Chief Executive Officer of the University of Maryland Medical System (UMMS), a nationally recognized academic health system that employees 28,000 people across the state of Maryland at more than 150 locations, including a network of academic, community and specialty hospitals.

Prior to his role as President and CEO of UMMS, Dr. Mohan Suntha served as President and Chief Executive Officer of the University of Maryland Medical Center (UMMC). Founded in 1823 as the Baltimore Infirmary, UMMC is one of the nation's oldest academic medical centers, which provides a full range of discovery-based health care services to Baltimore City, Maryland, the region and beyond. As the flagship academic medical center of UMMS, UMMC focuses on the delivery of exceptional, high-value care, serving as a referral center for the most time sensitive, critically ill and injured patients. In partnership with the University of Maryland School of Medicine (SOM), UMMC is committed to its tripartite mission of delivering superior care, training the next generation of health care professionals and serving as an anchor institution to the people of Baltimore to advance community health, wellness and workforce development.

Dr. Suntha also served as President and CEO of the University of Maryland St. Joseph Medical Center from 2012 – 2016, where he worked to rebuild trust and alignment between the medical staff, employees and administration and led the organization from a loss of $72 million in FY13 to a position of profitability in FY16. Building on an established culture of safe, high quality, compassionate care, the hospital’s turnaround surpassed all expectations.

From 2009 to 2012, Dr. Suntha served as Vice President for System Program Development at UMMS. Dr. Suntha has maintained faculty and clinical appointments throughout his administrative roles.

Dr. Suntha is a member of the American College of Radiation Oncology and the American Society for Therapeutic Radiology and Oncology. He received his MD from Jefferson Medical College, his MBA from the Wharton School of Business at the University of Pennsylvania and his BA from Brown University.