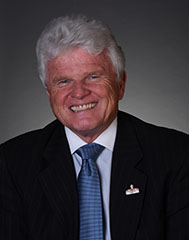 Robbie Callaway is a lifelong advocate for child safety and opportunity, especially for children from the most disadvantaged circumstances. From his early days directing group homes for juvenile delinquents to leading a national effort to promote juvenile justice reform, he has always focused on youth-related issues. His early efforts laid the groundwork for his future national accomplishments. During his 24-year career at Boys & Girls Clubs of America, Callaway led a Government Relations team who, with very supportive relationships on Capitol Hill, raised over $1 Billion for the organization. He was also instrumental in expanding the number of Clubs in public housing communities from 25 to over 450 Clubs and was the driving force in BGCA expansion onto over 220 Indian reservations across the nation. As a mark of their respect for his deep commitment to Native American children, Callaway was adopted into the Oglala Sioux Tribe in Pine Ridge, South Dakota during a sacred Hunka ceremony.

He is a founding Board Member of the National Center for Missing & Exploited Children (NCMEC), Past Chairman and currently serves as a NCMEC Board Member. In addition, he is Chairman of the Board of Directors of the Cal Ripken, Sr. Foundation, an organization committed to serving youth nationwide through character building programs. He is also a Board Member of Hearts and Homes of Maryland the organization with which he began his career. Throughout his career, Callaway has and continues to play a pivotal role in the development and passage of several key pieces of national legislation including the Runaway and Homeless Youth Act; the Juvenile Justice and Delinquency Prevention Act; and the 2003 passage of the National Amber Alert legislation. Continuing the national effort, he joined forces in 2006 with longtime friend, John Walsh, to help spearhead the passage of the Adam Walsh Child Protection and Safety Act, the most comprehensive piece of child safety legislation in 25 years. He also advocated early on for eliminating the digital apartheid faced by Americas most disadvantaged children and played a pivotal role in the creation of NCMEC national child internet safety program NetSmartz.