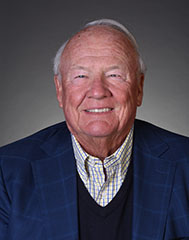 Guided by a deep commitment to his community, his family, and his faith, Francis X. Kelly has carved a history of public service, business success, and civic involvement. Senator Kelly was elected to represent the citizens of northern Baltimore County in the Maryland State Senate for a 12-year tenure defined by leadership, effectiveness, and compassion. He led legislative efforts to create the University of Maryland Medical System, which includes six hospitals in Maryland, namely Shock Trauma, as well as the University System of Maryland, which includes College Park and 13 other state colleges and universities. Senator Kelly was instrumental in the creation of the Maryland Stadium Authority, which amongst its many accomplishments was responsible for building Oriole Park and Ravens Stadium. Senator Kelly’s leading role in the creation of the Maryland Spending Affordability Committee has saved state taxpayers billions of dollars since its creation.

Senator Kelly has earned countless honors and recognition including being recognized as one of the top 100 Irish business leaders in the United States by Irish America magazine. Most recently, he was named to the Baltimore County Chamber of Commerce’s Business Hall of Fame and was the 2006 recipient of the Community Service Award from the Fellowship of Christian Athletes. He was also recently inducted into the Monsignor Bonner High School Hall of Fame.